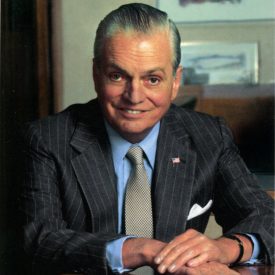 The Corning Incorporated community mourns the loss of James R. Houghton. Houghton devoted nearly five decades to the company, serving twice as chairman and chief executive officer. Known to all as “Jamie,” he led the company into a new era of innovation and growth, while building a culture that embraced diversity, championed quality, and could thrive in the face of change.

Houghton is known for setting the company on the track toward global innovation across a wide variety of high-tech fields, including optical fiber. His first job with Corning, in 1962, was a shift foreman in a lightbulb plant in Kentucky. He held a series of leadership positions in finance, international business, and consumer products that helped drive the company’s global expansion and establish quality principles across all its operations. He assumed the role of chairman and CEO in 1983. From then until his retirement in 1996, company sales grew from $1.5 billion to $5.3 billion.

Houghton came out of retirement in 2001 to lead the company through the telecommunications-industry crisis and into new prosperity as a world leader in the LCD glass industry. He transitioned the role of CEO to Wendell P. Weeks in April 2005 and chairman in April 2007.

“Jamie was an exceptional leader, a dear friend, and one of my personal mentors. Whether you had the good fortune to work directly with Jamie or not, everyone at Corning has been touched by his vision and his leadership,” said Wendell P. Weeks, chairman and chief executive officer. “Jamie leaves a remarkable legacy, including the company that he was instrumental in building into one of the world’s leading innovators in materials science, the cultural institutions he strengthened with his philanthropy, the communities that he enriched with his support, and the countless lives he touched with his generosity and warmth.”

A memorial service will be held at a later date. In lieu of flowers, please consider a contribution to the Laura Richardson Houghton Youth Center in Corning, NY, Big Tree Boating in Islesboro, ME, or your local Planned Parenthood.